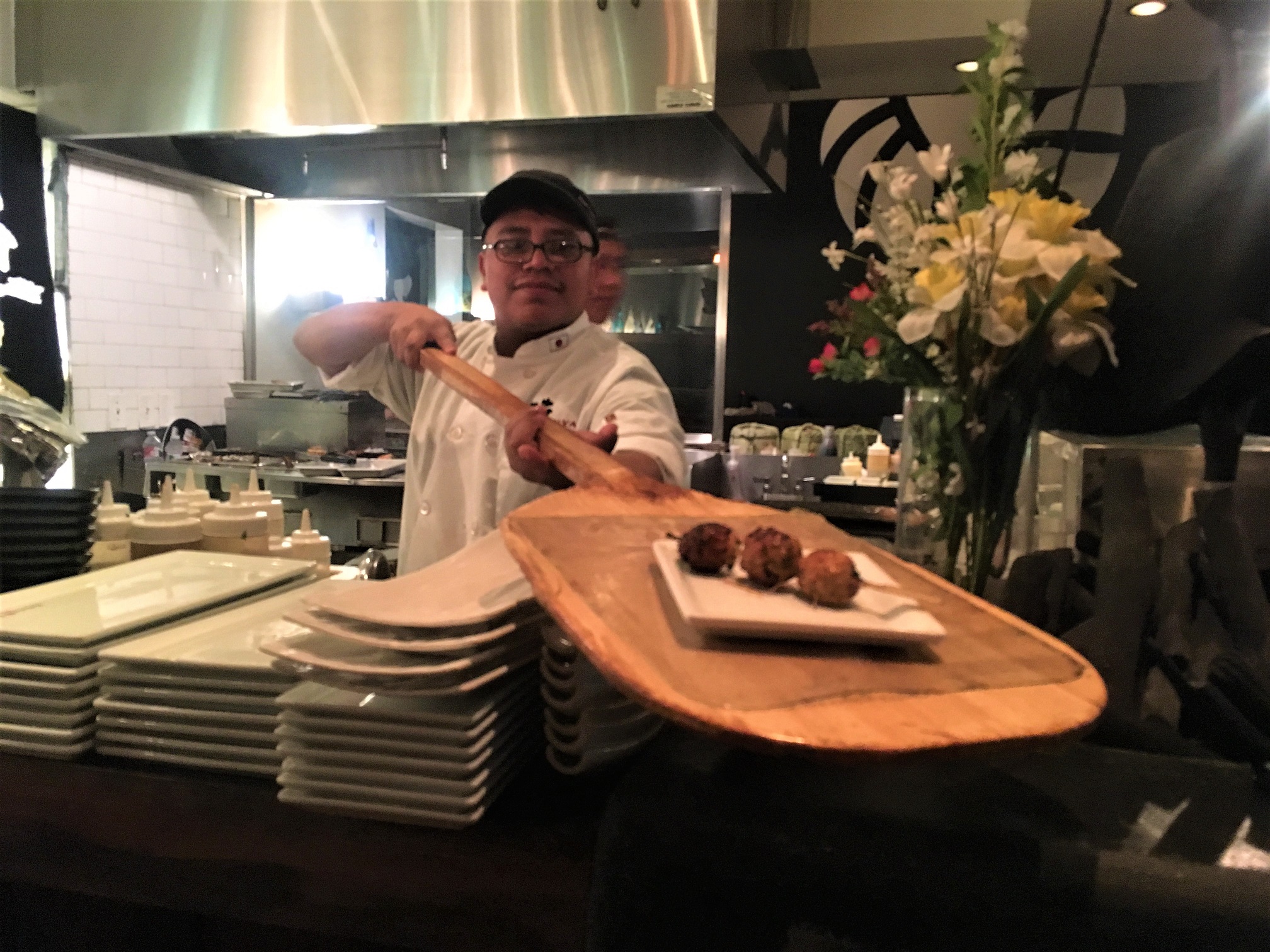 Last night I met up with my old friend, Brian, for dinner, whom I haven’t seen in a while.  He loves the Japanese culture, so he suggested we go to Robata Jinya.  It’s a small but lovely place, with modern Asian decor including a Samuri, and they have a separate outdoor seating area in the front that’s covered.  Brian and I were seated at the part of the sushi bar that’s against the wall.  It was comfortable, but a slightly tight squeeze for those trying to get by us.  It wasn’t bothersome though.  And the music was maybe a tad loud, but you could easily have a conversation without shouting.  I like that all the chef action is right in front of you.

We didn’t have reservations, but they were able to seat us quickly and our waitress came by soon after.  Brian ordered the Sapporo Draft beer and I asked to try the two reds they have (Meiomi Pinot Noir & Justin Cabernet Sauvignon) of which I chose the Cabernet which got even better when the food came (Yum!).  I must say I was a bit surprised that the wine menu was rather limited, but hey, it’s not a French restaurant.

As for food, I let Brian take charge of that.  He’s been here many times before, so I figured he’d know what’s good, and he didn’t disappoint.

First came a Cucumber Salad, which I love.  So simple but always good.

Next was the Shrimp Toast which was delicious!  It’s basically bites of a grilled cheese sandwich with shrimp. Fyi, it was so yummy that we ate the top layer before taking the pic.

Then came the Homemade Tofu.  Now I have to admit, I don’t like tofu, but I agreed to try it and it actually wasn’t bad… still wouldn’t order it again, but not bad once you dress it up with the DIY extras it comes with. I like that it wasn’t a block of tofu cubes.  Basically, they have the tofu in a bowl and then pour a hot liquid over it and you wait a few minutes for it to take form. As for texture, I didn’t like it.  It was almost like a pudding  which was off putting to me, but I liked it enough to finish it.

After the tofu came the Wagyu Beef Lava Stone Grill.  It starts out beautifully with slices of beef on black stones, then it turns Fabulous when they set the plate on fire!!  Love it!!!  And it tastes great too!.  Super tender and delicious.  My only criticism is that there wasn’t more.

Next… Tsukune (Chicken Meatballs) which they presented to us on what looked like a pizza peel.  So cool!!!  But not my favorite.  With the other items being so good, it wasn’t a big hit with me, but I can’t say I’m a big meatball fan, so maybe that’s why.  Dunno.

And, yes, there’s more.  The Negima (Chicken Thighs) skewer with scallions.  Pretty good, nice and tender It’s chicken, so not much to say here.

And finally was the Seafood Ceviche which I chose.  Now I was surprised to see ceviche on a Japanese menu, and being that it’s a Peruvian dish, I wasn’t sure what to expect.  But it was really good!  And the plating was exceptional!  There wasn’t a Japanese spin on it, which I’m not sure would have improved it, but they did it justice.  Nicely acidic and not really limey as it can be sometimes.

Oh yes, we did get one more dish… the Tebaski (Chicken Wings).  They almost don’t look like wings on the plate, but they were very tasty.  Brian thought they were a bit salty, but I really liked them

Now by this time, we had both had another drink, and Brian also ordered some sake: Sohomare Karakuchi.  It came in a shot glass placed in a bamboo box/bowl, both filled with the sake.  Now I don’t care for sake, but this one was so smooooth, I’d certainly order one next time.  (Maybe I just haven’t had good sake before?)  And I love that they fill the bowl with the sake too.  I loved more that they topped off my glass of wine.  Fabulous!!

So what does it all boil down to?  Fabulosity!!!!  Great food, great attentive pleasant staff, fast service, exquisite presentation, and I can’t leave out the great libations.  Definitely need a do over.  Thanks Brian!!