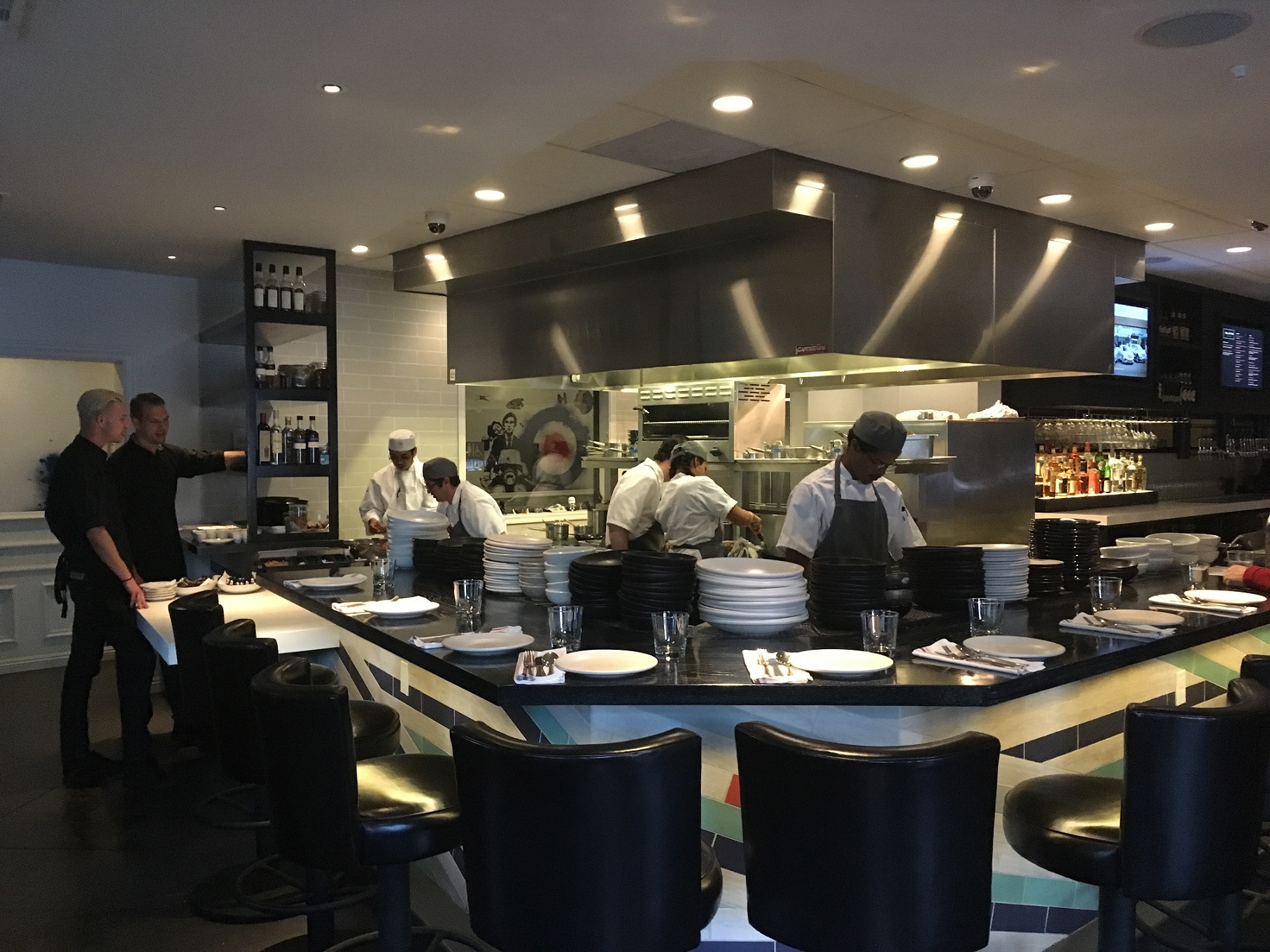 Tonight, Gretchen invited me to have dinner with her and her son, Sean, who was in town from Nashville. Her friend had recommended The Bellwether so she wanted to check it out. We had actually tried going there once before, but they were closed which made it difficult, so tonight we made an rsvp thru Open Table for 6:30pm.

Upon arrival, it’s a clean, crisp place with a long bar/kitchen, almost diner like, but scaled up. It also has simple tables and chairs which give it a cosy feel.

We were promptly seated, then greeted by our waitress, Brooke, who was very friendly and sweet and asked if we had ever been there. We said we hadn’t, so she explained that the plates are meant to be shared and that the menu starts with lighter options (salads and vegies), ending with heavier items (steak, lamb, etc). After perusing the menu, we decided upon the Butter Lettuce, Avocado Hummus, Crispy Brussel Sprouts, Charred Octopus, and the Grilled Skirt Steak. For drinks, Gretchen had the Dancing Coyote Pinot Grigio 2013 and I tried the two Syrahs: Kivelstadt Cellars “Father’s Watch” 2013 which was a Syrah, Mourvedre, Carignane & Grenache blend and the Black Sheep Finds “Holus Bolus” 2013 Syrah. I opted for the latter. In fact, Gretchen opted for the latter as well. She wasn’t that crazy about the pinot grigio. Sean got a Pelligrino… he was driving.  They also have an R&D Works in Progress section on the menu where they’re testing potential new menu items. We thought that was kinda cool, but I’d think that if they want people to try an item they’re working on, they’d discount it. Just sayin’…

Each dish came out kinda one by one, so that there were no more than two dishes on the table at a time. I don’t think any of us minded that. While there was enough room for all five plates, it was nice that they didn’t over crowd the table.

First to come out was the Butter Lettuce. So good. Nicely dressed in a light vinaigrette. I could eat this every day. The lettuce is torn, not chopped which made the pieces a bit big, I also thought it could have used a bit more grapefruit and avocado. I actually didn’t realize it had either until it was almost gone, but it was delicious even without it. Also, it had what seemed to be shallots that were sliced thinly, then delicately fried like onion rings. Fab!

Next to come was the Avocado Hummus. Eeh. I wasn’t that crazy about it, plus there was hardly enough there to share. Sean and Gretchen liked it. Even though it was described as being a chickpea hummus with avocado, it was had to tell there was any chickpea. It seemed like it was all avocado and vinegar, imho. Mind you, I love avocado, but it wasn’t what I was expecting, plus I thought it had too much vinegar.

After that was the Charred Octopus which came on a Greek yogurt and tabbouleh spread. It was cooked perfectly, which is not easy to do, and was only missing some acid, so I asked for some lemon wedges which made it so much better. Yum!

Now the Crispy Brussels Sprouts, I shouldn’t really comment on, because I’m not a fan. Sean loves them, though, and loved these. Gretchen seemed to have bitten into one that had a lot of the chili on it, so she didn’t venture further. I tried one, and it was good, just not my thing.

The Grilled Skirt Steak came out last, and it did not disappoint. The sauce on it was a soy ginger sauce and we all thought it was Fab.

After that delicious meal, we couldn’t pass on dessert, and when we saw the Jameson Bread Pudding, we knew immediately that was the dessert for us. To compliment it, I asked for a B52 Coffee, but surprisingly, they don’t have Kahlua or any kind of coffee liqueur, so I just got a decaf coffee with Bailey’s. Gretchen got a shot of Four Roses Bourbon, which I don’t believe she’s had before, but thought it was great. I agree.

The bread pudding looked so good when it came out, and looks did not deceive. What really put it over the top was having the bourbon with the bread pudding in the same bite. OMG Fab!

Needless to say, we’ll be back and this place will likely go on our Fabbest list. Thanks Bellwether!!