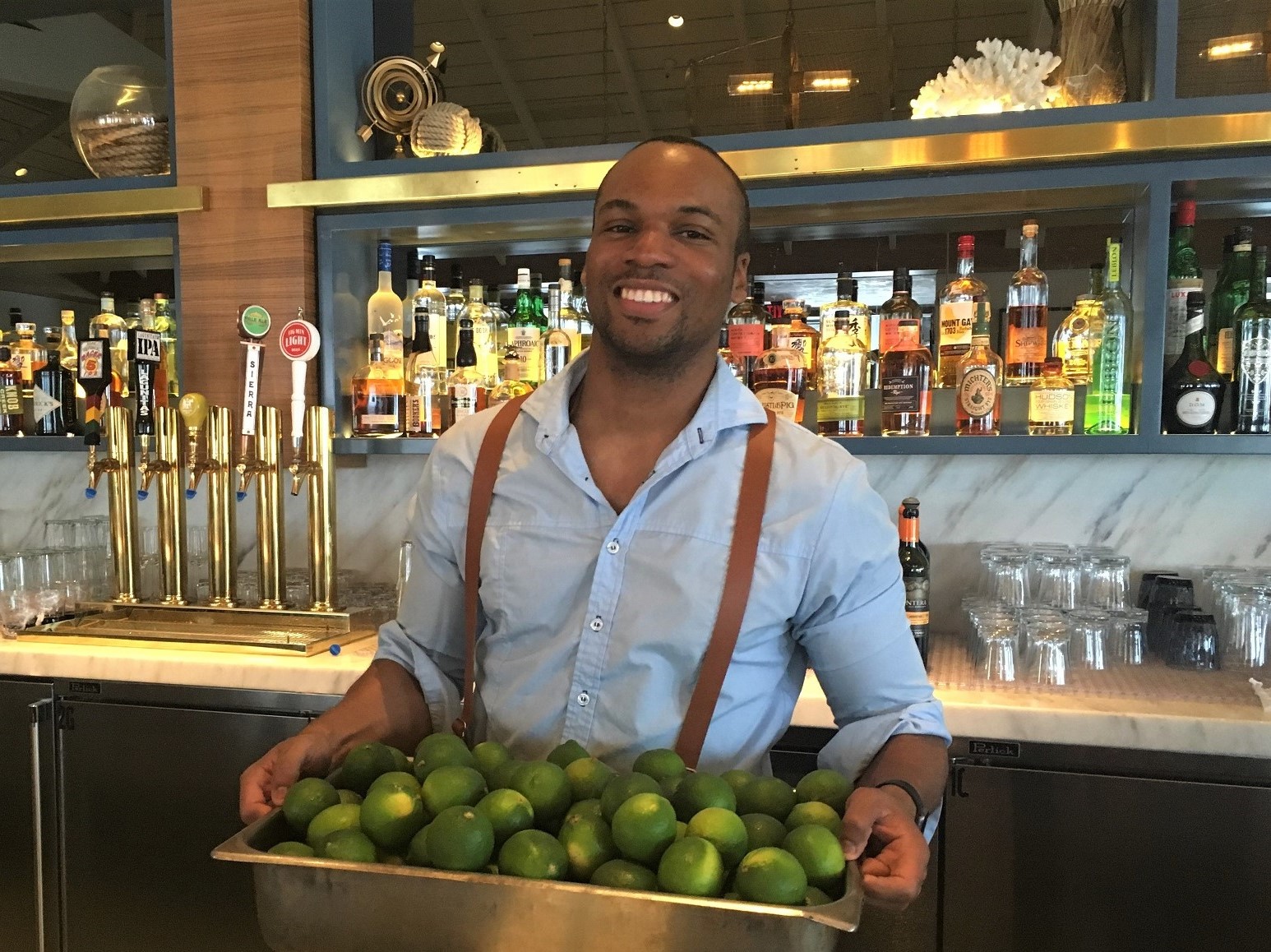 Gretchen had some errands to run today, so I met her close by at Laurel Point for lunch. She had been there before and a friend of hers also recommended it as a great place to go for happy hour. Seemed like a bit of an odd location to have a nice dining establishment in a strip mall, but it works. It’s located on the second floor of the mall which is on the corner of Laurel Canyon & Ventura Blvd. It has a clean, fresh feel to it, and it’s obvious they paid attention to the small details when designing the place. Gretchen particularly liked the silverware, which was nicely weighted and not your average restaurant-ware. One thing we also noticed was that they allow dogs in the patio area.

I arrived a little after Gretchen, who was seated at the bar drinking a glass of Pinot Grigio and chatting with her new friend Nate, the bartender. I stuck with water and after looking over the menu, I found myself deeply craving the Crab Deviled Eggs and the Lobster & Shrimp Cobb Salad even though I wasn’t that hungry. I’m a fool for lobster, so any time I see it on a menu, I want it. Gretchen was itching for the Crispy Chicken Salad, but agreed to share the Lobster Cobb with me. I left the Crab Deviled Eggs for next time.

When it came out, it looked delicious, but also difficult to eat as they packed the bowl to the top, so you couldn’t mix it up easily. It came with a Green Goddess Dressing that Gretchen actually really liked in spite of it having cilantro. The salad overall was pretty good, but we both agree that lobster is best by itself with butter. Next time I want to try the Tuna Tataki Salad or the sushi this guy next to us was eating: Crab & Hamachi Roll. It looked so Fab I asked if I could take a picture of it. He said he’d had it before and it’s really good.

We asked Nate what kind of desserts they had, and I was surprised to hear they only had three: a Nutella Cake of some sort, a Nine Layer Coconut Cake, and a Strawberry Shortcake. As much as I like sweets, I’m not a huge fan of chocolate. I’m also not crazy about coconut, so we opted for the Strawberry Shortcake. Gretchen also ordered the Coconut Cake for her husband.

First to come out was the Strawberry Shortcake, which was more than enough for two people. It was served in a goblet, filled over the top which again made it hard to eat. It was good, but the shortcake was quite dry.

Next came the Nine Layer Coconut Cake. Let me start by saying that they weren’t kidding… it truly is nine layers and obnoxiously massive. You could have easily eaten it for lunch and dessert and still had leftovers. Quite frankly, they should have stopped at 4 layers, imho. It was served with a passion fruit sauce we both thought was Super Fab. They should make a sorbet out of it. Gretchen thought the cake was Fab as well. It had a lemon frosting that was very good, though I’m not sure I love the combination of the coconut with the lemon, and I think with the addition of the passion fruit sauce, it was a bit of an odd combination. I have to admit, though, the desserts were only $8 each which, considering the size, was very reasonable.

After our lunch, we departed to run errands. We look forward to seeing you again at happy hour, Nate!